The founding member of the Coventry 2-Tone group picked up the inspiration award at the 59th Ivor Novello Awards in London.

It came three decades after his song, Nelson Mandela, stormed the charts calling for the release of the anti-apartheid campaigner.

Dammers scored a top 10 hit with the track performed by Special AKA.

The song became an anti-apartheid anthem and Mr Mandela, who died in December, was eventually released in 1990.

The annual awards, known as The Ivors, are presented by the British Academy of Songwriters, Composers and Authors and are highly prized because they are voted for by songwriters and composers.

Dammers was presented with his award by former Clash guitarist Mick Jones, who described him as “the Tsar of Ska”.

Dammers - who no longer performs with the reformed Specials - revealed that he had almost missed the ceremony because his mother is ill, and dedicated his win to her.

“I don’t think protest music necessarily has to have lyrics even,” he said. “You can have instrumental protest music, you know - jungle, dub-step, all of those are kind of abstract but still protest music like jazz was before.”
Posted by funboy1 at 3:51 PM 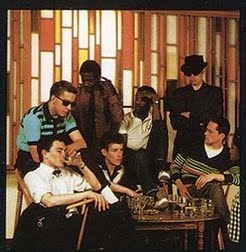